James Noble-Rogers is Executive Director of the Universities Council for the Education of Teachers (UCET), a membership organisation for universities involved in teacher education and education research. Prior to taking up this position in 2004, he was Head of Governance at the Royal National Institute of the Blind (RNIB) for four years. Before that he was, from 1987 to 2000, a civil servant in the Education Department (in its various guises) and the Teacher Training Agency. He was born in 1961 and has an Honours degree in Humanities from Hatfield Polytechnic, a Master’s degree in Philosophy from the University of Nottingham and a Postgraduate Diploma with distinction from City University, London. He is an Honorary Fellow of Wolverhampton University, and in 2015 was awarded an honorary master’s degree in Education from the University of Hertfordshire. 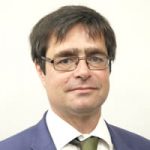